“When nine good-hearted young men stroked together, pulled together as one, gave everything they had for one another, bound together forever by pride and respect and love.” – Daniel James Brown

As I sit down to write this piece the night of my last race in the maroon and gold, it’s impossible to not think about how this team and I have changed over the past four years. I think about every change: from wearing a Superfan t-shirt to a BC unisuit, racing in Georgia instead of Worcester, different pair partners (from Ryan Montgomery ’13 through James Connolly ’15) and boatmates, enjoying team breakfasts at Lower or IHOP and everything in between.

Before I could even sit down at a computer, I needed to crop a picture to make one last inside joke on the team GroupMe before my teammates caught their flights home. Some of these friends I’ve known for four years, others just this year, but all feel close. This is always one of the toughest days of the year for me, but it is without doubt tougher this time than any other. You are not sure when you will see these guys, who you spent two hours with every day of college, again. I laugh to myself when I think about how far this team was from my college plans.

Coming in as a freshman, I was pretty confident I would continue along my high school career with club soccer or varsity track. When I learned by the middle of September 2010 neither of these would happen, I took a Monday afternoon jog to the boathouse with the men’s crew captain and 20 other freshmen. Running toward the front of the pack, I figured this was another sport where I could find myself in the top half. Lifting my head from the trash can after my first “6K” test on the ergometer (meters), my 18th place finish of 20 members displayed something different.

With my mother already having to text me in the morning to make sure I woke up for my 9 a.m. MWF Philosophy of the Person class, 6 a.m. practices too became an adjustment to make. (Luckily, we practiced later this past semester.) However, the combination of wanting to pursue successful athletics and solidarity with my teammates drove me to make every morning practice. The continuity of a second year coaching tandem helped the team to successful racing, including medals at major regattas like the Knecht Cup and New England Rowing Championships. The gold at New England’s in 2011 was the first for the program.

Starting as a freshman from Fordham Prep with a small, Westchester circle, I now had teammates from Maine, Maryland, Massachusetts and Michigan in my class. All united by the common goal of putting out the fastest boats for the program and ourselves. I was routinely asked by roommates and classmates, “Why do you do that to yourself? Why aren’t you going out tonight? You’re really going to wake up that early?” But I had my answer: “I can’t let my friends down, we want to be the best” or “My teammates are going to be there ready to work. I need to do the same.”

Each year, the improvements continued. After a fifth place finish in the team points trophy in 2011, we took home the New England Men’s points trophy this year for the first time since 2003. After we did not attend the national championships in 2011 for financial and competitive reasons, we posted two Varsity Eight Grand Final finishes, including a sixth place finish this year. These finishes are more impressive because many of the top finishers draw on about twice the number of total undergraduates. Four years ago, the Freshmen Eight became the Row2k crew of the week. This May, the entire team earned the honor together. Four years removed from my head in the trash can, my boat earned a silver medal for our category at New England’s.

Rowing success is only half of the reason I am proud of this team, the Jesuit term “cura personalis,” meaning care for the whole person, defines why my teammates impress me. 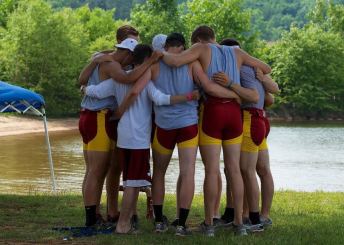 As a club team, the team board members coordinate all of the travel, gear, scheduling and promotion. We have replaced our old website on iWeb with a new bccrew.org through SquareSpace, adding Facebook, Twitter and Instagram pages along the way. Juggling above-average GPAs, jobs (Hillside, Center for Student Formation, Student Admissions Program and BC Athletics), clubs (University Wind Ensemble, Pulse, Smart Woman Securities, BC Recreation, Big Brothers Big Sisters and the New England Classic), team practices, difficult majors and individual training from 6:45 a.m. to 9 p.m. or later, they are some of the smartest, toughest and hardest working people on campus.

In addition, they are the funniest roommates you will ever have on a road trip, special mention to Campbell Wallace, James Connolly and Cayce Jones. I am thankful to them, my parents, the team alumni and the school for making the entire experience possible. Looking back at four years of tough training, great racing and some of my best friends, I would like to encourage anyone coming into school or anyone looking for a competitive team to think about joining this unique experience.

For more pictures of the BC men’s crew team view our gallery below:

Alex Tuch and Sonny Milano Hope to be Drafted in First Round Together »
« At a Glance: BC Hockey’s 2014 NHL Draft Eligible Players